Amy Wells | December 22, 2018
Comments Off on Christmas with Saints!

It has been another successful Christmas season for Saints, with concerts and carols being performed both locally and live via satellite to as far as Australia!

On 27th November 2018, the band again led the Christmas parade around the town at the Wokingham Winter Carnival. The town centre was packed with people as the procession weaved its way around the town before concluding in the centre. This year we were also extremely excited to support the young musicians of the Berkshire Maestros Bracknell and Wokingham Music Centre, who led the crowds in the lead up to the turning-on of the town’s Christmas lights. The musical future of the town is very much in safe hands!

On 1st December 2018, the band performed as Day 1 of the Wokingham Living Advent Calendar at Wokingham Town Hall. Supporting the Thames Valley Hospice, the advent calendar showcases local artists each day leading up to Christmas. This year our performance was broadcast live via Facebook to a number of viewers down under, making it a truly international event!

Finally, in-between numerous carolling appearances at local supermarkets, housing estates and shopping centres, we performed our own Christmas concert on 14th December 2018 at Wokingham Town Hall. Playing to another packed house, the band performed a varied concert of carols (as selected by followers of the band’s Facebook and Twitter pages in the lead-up to the concert), well-known Christmas numbers, as well as some non-Christmas music also.

The highlight for many was the band’s performance of Philip Harper’s The Greatest Storyteller, a piece of work arranged for the Cory Band’s Brass in Concert entertainment programme in 2017 to commemorate the life of Roald Dahl. The piece comprises three tunes from Chitty Chitty Bang Bang, Charlie and the Chocolate Factory and Matilda, and gave a number of soloists from the band a chance to shine. Soprano Cornet Llewellyn Wells featured in the title number from Chitty Chitty Bang Bang, while our euphonium duo of Rosie Saxton and Mark Lowe performed together during Pure Imagination. Finally, Principle Cornet George Sandford led the finale of When I Grow Up.

Finally, our Christmas concert gave us the chance to reward particular members of the band for their hard work and contribution to Saints over the course of the previous year. This year, 2nd Baritone player and Contest Secretary Leighton Cornelius was voted Bandsman of the Year by the rest of the band, while Bb Bass Josh Moorhouse was awarded the MD’s Musician of the Year award, with both being richly deserved. 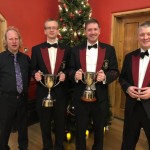