Following on from the success of last year’s Reading Festival of Brass, Saints were delighted to be invited once again by the Reading Spring Gardens Band to perform at this year’s event. Not resting on its laurels, the event had also grown in size from last year, with the addition of the Tadley Concert Brass band. This year’s concert moved to a new venue at the Michael Malnick Centre Theatre at Leighton Park School Reading, in order to accommodate both more musicians and spectators!

The concert itself was tinged with some sadness, due to the passing of Reading Spring Gardens’ conductor David Ruel in the days leading up to it. David was well-known and a friend to many in the brass-banding community across the country. We hope that the concert served as a fitting tribute to his memory and we were proud to be able to have been a part of this.

As with last year’s Reading Festival of Brass, this was a concert with a twist. While the purpose as always was to present an entertaining programme of music, the concert also had a slight contesting element to it. While no prizes were on offer, editor of 4BarsRest Iwan Fox was in attendance, marking each band on their performance, which had to fulfil a certain number of criteria. Each band was required to perform an overture, a march, a solo, and hymn, and then a final item of each band’s own choosing.

Performing first, Saints opened the concert with the overture Henry the Fifth by Ralph Vaughn Williams. As our solo item, Saints’ Flugel player Michael Bird performed Paul Lovatt-Cooper’s One Day, described by the composer as music which follows in the footsteps of Pat Methany’s music, who is famous for his easy listening jazz styles. Our march number came from the catalogue of Salvation Army music, Star Lake by Eric Ball, as did our hymn requirement, which was fulfilled by Darren Shaw’s Guardian of My Soul – an arrangement which combines the composer’s own song I Worship You with the well-known hymn O Jesus, I have Promised, both of which contain the lyric Guardian of my Soul. Our own-choice finale returned to the pen of Paul Lovatt-Cooper, with standing ranks of cornet and trombone players performing Horizons.

After being entertained by both Tadley Concert Brass and Reading Spring Gardens, we returned to the stage for a massed band finale of all three bands together performing Roy Newsome’s march Belmont and The Lost Chord.

The Festival was once again a great success and we were delighted to be a part of it. We look forward to similar success at the Reading Festival of Brass 2020! 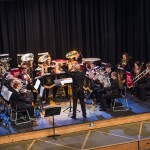