Amy Wells | April 15, 2019
Comments Off on Wokingham Celebrates the Life of Bob Wyatt

Saints were extremely honoured to be asked to provide music during the funeral service for the honorary alderman of Wokingham, Mr Bob Wyatt.

The funeral of the former mayor of Wokingham took place in All Saints Church, preceded by a funeral procession which paid tribute to one of his great passions in life: the Austin Seven motorcar.

Before and after the service, the band played a number of military and army marches, again reflecting another of Mr Wyatt’s great interests. During the service, Saints provided the music to Jerusalem, Dear Lord and Father of Mankind, and I Vow to Thee My Country. The Last Post was also played by the band’s cornet player and Wokingham Town Council’s honorary bugler, Damon Emes.

Saints have always been very proud to support the people and community of Wokingham and always take great pride in performing our civic duties. It was a privilege to be able to play our part in celebrating the life of Bob Wyatt – a man who had done so much for the town of Wokingham for so long. 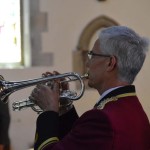