On 24 February 2019, Saints made the relatively short trip around the M25 to The Hawth Theatre in Crawley for the SCABA Spring Contest. This has become a yearly event in the Saints calendar as the ideal opportunity to give the Regional test piece a run-out under competitive conditions away from the safety of the bandroom!

Competing in the Second Section, Saints performed the march Praise by Wilfred Heaton as our own choice march number, before this year’s Regional Test Piece Rise of the Phoenix by Darrol Barry as our major work. Unsurprisingly, every other band performed the same test piece, giving us the chance to see where we stood a few weeks before the Regional Finals themselves.

Once all bands had performed and the adjudicator, Melvin White, had tallied his scores, we were delighted to find out that we had placed in second overall – meaning that we got to take home exactly the same trophy we won the year before!

Thank you again to SCABA for running another successful Spring Contest – it is an invaluable opportunity for us to practice the Regional piece under contest conditions.

Onwards and upwards to Stevenage in a few weeks for the Regional Finals! 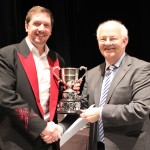